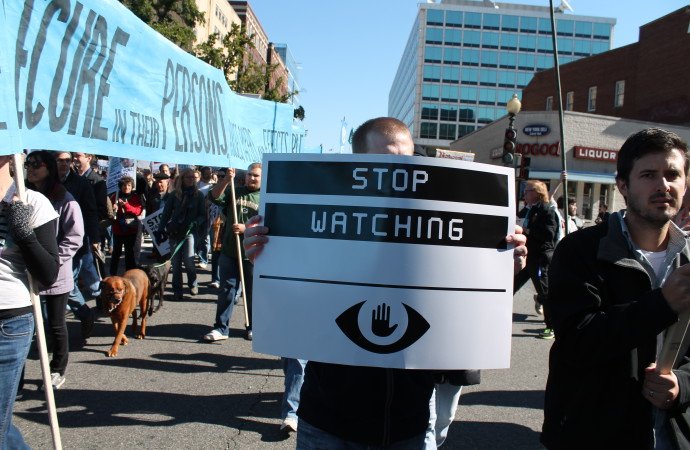 When it comes to the clash between surveillance and civil liberties, it seems the fight is still very much on. It’s a war we have to win and with the General Election looming, making the case that mass surveillance and privacy should be important issues for voters is pretty vital.

Happily, on that score, there have been a number of developments that might just help us move the debate forward.

On Monday, the Committee on Legal Affairs and Human Rights, Europe’s top rights body published a report that shows that it believes mass surveillance is a significant threat to human rights.  That’s good news for anyone hoping to see a rolling back of the surveillance state.

The report recognises what many have saying for years about the threat of mass surveillance. It did not shy away from discussing the disclosures made by NSA whistleblower Edward Snowden:

“The disclosures have provided compelling evidence of the existence of far-reaching, technologically advanced systems put in place by US intelligence services and their partners in certain Council of Europe member states to collect, store and analyse communication data, including content, location and other metadata, on a massive scale”

That a committee charged with investigating threats to Human Rights had to rely on disclosures from a whistleblower is alarming. It also says a lot about both the need to protect those who dare to speak out and the dire need for more transparency when it comes to surveillance.

The report also highlighted that the repeated, anguished cries from governments that ‘tearing down our freedoms is vital in the fight against terror’, might not be quite true:

“[A]ccording to independent reviews carried in the United Sates, mass surveillance does not appear to have contributed to the prevention of terrorist attacks, contrary to earlier assertions made by senior intelligence officials. Instead, resources that might prevent attacks are diverted to mass surveillance, leaving potentially dangerous persons free to act.”

When you add that to what we know about how mass surveillance has been used to undermine opposition politicians, human rights activists, and journalists and it becomes abundantly clear that these programmes are a huge risk. A risk that is not even slightly balanced by the benefits, nor justifiable on the evidence as some might claim.

Of course governments and lawmakers often see things differently, or simply don’t get it at all.

In the UK, we had to deal with an absurd attempt to introduce the Snoopers’ Charter by tacking most of it on to the Counter Terrorism and Security Bill as an amendment in the Lords.

The attempt faced opposition from Pirates, rights groups and better informed members of the upper house, and happily it was withdrawn, although not before we were again subject to a debate that skewed the realities of both the risks and benefits of mass surveillance.

Of course it wouldn’t be a debate about surveillance if it didn’t include some cringeworthy statements intended to suggest that the spectre of technologically driven terrorism justifies all.  Lord King of Bridgwater’s comments seemed to sum the attitude up:

“We have Facebook and Twitter. Somebody tried to explain WhatsApp to me, somebody else tried to explain Snapchat. I do not know about them but it is absolutely clear the terrorists and jihadists do.“

Technical illiteracy aside, (and we shouldn’t expect every lawmaker to be an expert in every field after all) it is staggering given what we learned from the Snowden disclosures that we continue to hear that there is a ‘capabilities gap’. Nor is it credible to argue that the police and intelligence agencies have seen their capabilities reduced.  Lets be clear, we are collecting more of everything not less, we are collecting information that didn’t even exist 10 years ago.

Once again the Snoopers’ Charter has been dealt with, even if we do have to prepare for its inevitable revival as David Cameron has promised should he win the election. No doubt a Labour Government would rename and regurgitate the same (after all, the Snoopers’ Charter is simply a redux of previous Labour proposals).

It seems that supporters of freedom are gaining some traction in the surveillance debate.  Yet the fight against mass surveillance, on a level that despotic regimes have only been able to dream of in the past, is far from won. There are still too many powerful voices fighting for an ever-increasing surveillance state.

Hard on the heels of our own Prime Minister asking rather ominously whether  “[w]e want to allow a means of communication between people which we cannot read?” it seems that the European Union’s Counter-Terrorism Coordinator, Gilles de Kerchove has had a similar idea, calling for internet and telecommunications companies to be obliged to share encryption keys with police and intelligence agencies.

The Internet of Things

It is clear that unless we change direction soon, the issue of surveillance is going to get much harder to deal with.  We have seen a lot of discussion about the Internet of Things recently, seen the growth of smart devices, from TVs, boilers and electricity meters, through to cars. For the surveillance state that means more targets, more programmes, more information to grab and monitor.

Suddenly the potential for the collection of communications not deemed to be ‘content’ might get much bigger and even more revealing than it is now.  I’m not sure about you, but I really don’t want my boiler, console and fridge spying on me and my family.

So, what can we do? We shouldn’t be looking to Europe to take a lead on these issues and save us (although it’s great to see it happening). Our own government is complicit in mass surveillance in a big way and that means we can demand a real impact.

We have an election to fight

Change has to come from each of us. After the last General election, the coalition talked big about civil liberties and freedoms. Who can’t agree with the Coalition Agreement’s opening text on Civil Liberties:

“The Government believes that the British state has become too authoritarian, and that over the past decade it has abused and eroded fundamental human freedoms and historic civil liberties. We need to restore the rights of individuals in the face of encroaching state power, in keeping with Britain’s tradition of freedom and fairness”.

But let’s face it, in that regard the Conservatives and Liberal Democrats have failed and failed miserably.  In the coming election we have to make sure that surveillance, our privacy and civil rights more broadly are a big part of the discussion.

Any party that seeks to increase government power by reducing our rights should be seen as unelectable.