Putting the Greenhouse in the Powerhouse 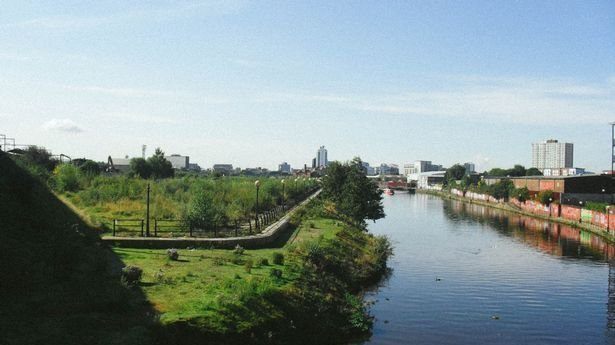 Pomona at the heart of Greater Manchester has become a bit of an in-joke for many. Urban legend has it that Pomona Metrolink station is the place where no-one gets on or off, a monument to the folly of urban planners.

Pomona Island has been described as a “hidden gem”. The wild site nestles between the Manchester Ship Canal and the railway arches, stretching for over a kilometre. Pootling past on the tram, it’s a welcome respite from the Angry Beetham style of architecture everywhere in our city.

This stretch of land is in fact far from unused. It’s a favourite destination for dog walkers, joggers, urban explorers and bird watchers. The island is home to a rich wildlife, the Salford Docklands are an important site for lapwings, kingfishers have been spotted, over 150 species of flora have been recorded by ecologists. It’s a gloriously defiant example of nature thriving despite all that humans can throw at it.

That is, until now.

Plans have been submitted by developer Peel and contractor Rowlinson for some drearily bog-standard flats to be put on a plot to the east of the island. This would form part of a Pomona Wharf scheme, which could see thousands more units to come.

Already the verdict on the Peel development hasn’t been kind.

The drawings are embarrassingly sketchy, but the intention is clear. Naturalists are concerned about the effect on wildlife, residents are objecting that yet more leisure and exercise space is to be taken from them. The blocks would directly impact on people living in 2 different local authority areas, Manchester and Salford.

Pomona’s fate is key for the shape of the metropolitan region as a whole. As Adam Prince from Friends of London Road Fire Station campaign put it, this is the “last vast green area” close to the city centre. If we want a Central Park for Greater Manchester this is the only viable option left.

Campaigners have set out an alternative vision- a kind of Eden Centre of the the North. Instead of turfing out the flora and fauna, preserve it even bring eco-tourists to Trafford. Instead of blocking off places to walk for thousands of new city dwellers and then wonder why obesity is a problem, preserve precious urban open space. A detailed counter-proposal for an international park and green infrastructure already exists, that works with the site rather than against it.

Of course there is a question of how realistic this is. But the region will still see major prestige project investment, such as the Factory space on the Granada Studios site, despite Whitehall belt tightening. This shows ambition is possible, we should hold out for better than “tat” if Osborne is really serious about his Powerhouse. It just requires political will to back the public mood.

The challenge that the “Eden Project North” sets out is why is wild space valued in rural England, yet seen as “waste” land in the urban context?

The architects of the DevoManc idea, think tank Res Publica have recently put out a report championing a “community right to beauty”, including in the urban setting. The report highlights “the health, economic, social and civic benefits of living near beautiful surroundings”.

The idea of beauty being a benchmark may seem a bit wafty even for Res Publica. But the benefits are clear. Parks and green spaces managed by UK authorities generated £1.1 billion of revenue in 2006 and the parks system in Denver was estimated to contribute $18 million through tourism alone in 2009.

After all, Pomona is where Trafford, Manchester and Salford meet. At the moment for all of the talk of integrating the city, the different local authority areas are glaringly divorced from each other. A focal park could draw together Trafford’s sport facilities, Salford’s Media City and Manchester’s shopping centre.

The DevoManc deal was supposed to be about giving citizens local power. Surely at the very least we can postpone the Pomona development until we have a real strategic plan for the heart of Greater Manchester valuing both green infrastructure and appropriate housing.

An Eden Project North would a vital signal about what kind of city we want. A city with space to live, not just be. Pomona need not be the urban legend joke. Let’s put the greenhouse in the Northern Powerhouse.